EDIT: Ahhh! I totally forgot to include the picture I took of that double page illustration I was working on in my last post after I colored it! Here it is:

I know it’s just an oddly cropped photo and I have gotten a real scan of this since, but I’m only going to post the oddly cropped one for now to leave the rest of it a secret. Ok, back to your regularly scheduled post below!

Over the end of the past week and weekend I got a few new little things started and one big thing finished. Due to the usual bummer time constraints of last week I didn’t really get any of the projects I was working at Trader Joe’s finished, but I got at least one of them off to a good start. I’m working on a few large drawings of anthropomorphic dessert foods to (believe it or not) replace some of the older large drawings of anthropomorphic dessert foods that are on the side of the freezer case. The old desserts were drawn by another artist before me and a lot of them are of seasonal or discontinued products, so I’m just supposed to just freshen it up a bit with some new illustrations. On Friday I started on some macarons.

I loved using that muted pastel color palette. When I ever get back to illustrating my very first children’s book story about Pinky Dandy I definitely want to use colors like that for the book.

Speaking of my children’s book work, on Saturday night I went to Comix Thing with Martyn and some friends who were sharing his table at the event. He sold a lot of buttons, and I walked around for a while and was inspired by the variety of printed indie comics, books, and zines at all the tables, as well as some other artwork and merchandise that people were selling. It made me look forward to the day when I can sell my own finished books at an event like that. I also sketched a little while we were there.

It’s meant to be my same character, Krampus Kringle, as an adult. For some reason he kind of reminds me of Nicholas Cage in that drawing. Here’s the sketch I did later of my other character, Kris Kringle, all grown up. This one is more self-explanatory.

The reason I decided to figure out what they would both look like older is because on the last page of my children’s book, the page that will say THE END, there is going to be a final illustration of them many years later working as partners. The drawing is based on this relatively well-known image from an antique postcard of St. Nicholas and Krampus. 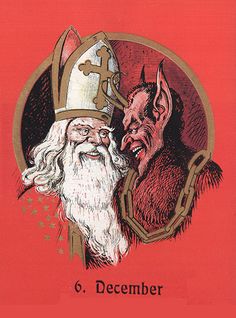 I had seen so many Krampus postcards before I ever saw that one in particular. I even own a book that’s a collection of Victorian Krampus artwork. It was that very image, however, that first got me to wondering why in the world those two dudes would be such good friends. Usually friends share a lot of common interests, unless of course their friendship goes way, way back…to their early childhood even. I’ve even seen a couple of vintage postcards where Krampus is riding a motorcycle and Santa is in his sidecar! So basically in seeing them so happy and oddly well-acquainted with each other, I came to the conclusion that they just had to be siblings…and that is pretty much exactly how I first came up with the idea for my story.

Here is my version of the postcard: 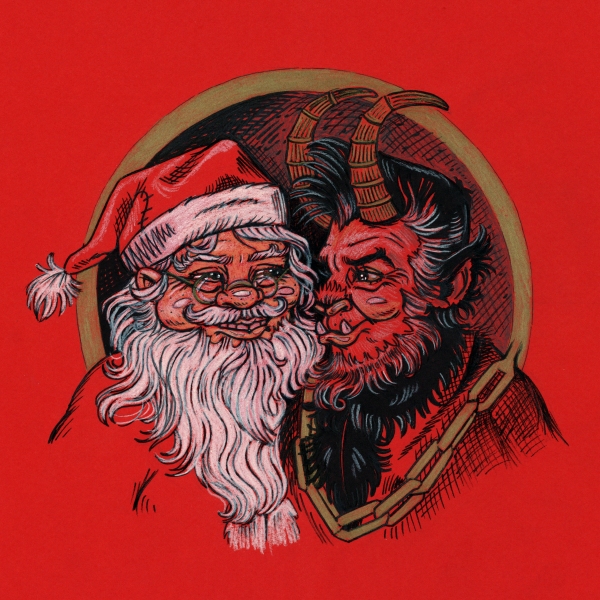 Martyn said that older Krampus looks like Morrissey, which I guess I can see…it’s the silver streaks in the hair. I drew this on red paper with the same black flair felt tip pens and colored pencils (black, white, metallic gold, and a little bit of peach/skin tone.) It looked to me as if that’s probably how the original postcard was drawn. It was really hard to see it while I was drawing under the desk lamp because the pencil, especially the gold, is super reflective. I’m just glad that it scanned ok.

I’m going to hand letter THE END in that same German storybook style calligraphy that’s on the original postcard. Now I’ve just got to do illustrations for the book covers, the title page, and the dedication page!