It’s been ten days since the launch of Kris & Krampus Kringle on Kickstarter, and here are some things that I have learned:

1. Reddit is pretty disappointing as a forum for sharing creative endeavors.

I suppose that I already knew this from every other time I’ve tried sharing art or creative posts on there in the past, but this latest attempt did a pretty good job at reminding me. Perhaps as an artist who loves monsters and horror just as much as I love children’s books and fairytales, I’m still dealing with some of the usual difficulties that I always face in trying to find the right niche for my work. Make a children’s book featuring a misunderstood monster protagonist, and narrow-minded horror purists will hate you, many traditionalists in the children’s book universe will think you’re just another sicko weirdo, and then there’s all of the people from neither camp who just happen to get upset by any new or unique ideas.

When speaking about Reddit specifically, this must be the equivalent to leading three billy goats to a bridge as a sacrifice. I generally find trolls to be ridiculous, comical, and a little sad by nature…and although I have never come across one skilled enough to really get to me on a personal level, I do think it’s a shame that so many of them exist. Trolls are merely a product of their environment, and their increased numbers are often proof of a depressed land ravaged by fear, hate, and apathy. Perhaps because it is in their nature to hide from the light of day in conscious isolation beneath the shelter of the internet forum, then it is only natural that their population expand to fill the growing void left behind in the place of community and enlightenment.

So… You say you like the krampus mythology and then take a fat shit on it by not actually using the alpine mythologies? And then you want to advertise your book on a completely unrelated subreddit? Is it possible to down vote someone so hard they actually physically suffer for it?

More diluitutation of folklore through pop culture. Thanks, Disney.

(I had to include this picture from Faerieworlds–it seemed oddly appropriate!) 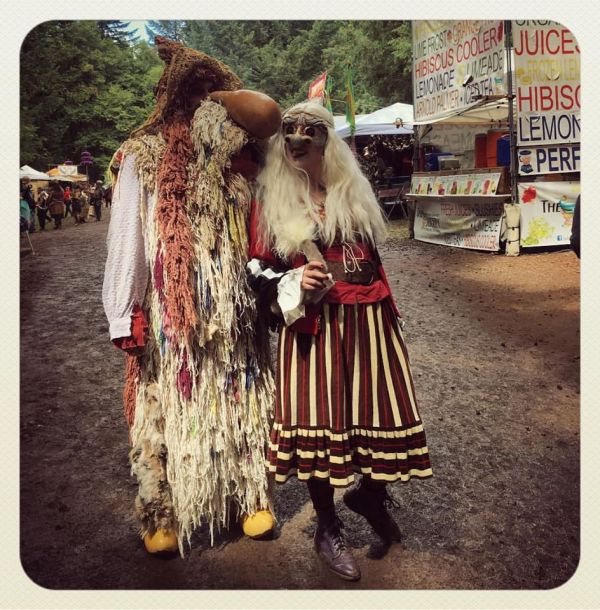 All I’m saying it is, it would be nice if I knew of some more supportive online forums for creatives to share their art and encourage each others’ hard work and innovation. If you know of any, feel free to direct me in the comments!

I will mention that the most supportive online groups of strangers that I have come across so far (besides other fantasy illustrators) are forums on Reddit and elsewhere that are associated with the Pagan, and most especially Wiccan, faiths. I suppose this doesn’t surprise me too much either; I have always found this community to be a very accepting bunch and this is part of the reason why I have always been drawn to it. For the past several years we have celebrated both Yule and Christmas in my house, so I chose to make a secular holiday book that focuses on family and acceptance as opposed to specific beliefs and religion.

2. Kickstarter is terrifying, and a brand new major source of anxiety!

After about a year and a half of perfecting my book, I of course wanted to set up the best Kickstarter campaign that I could possibly come up with. Besides backing a project once, I had never used Kickstarter before and was completely ignorant to how crowdfunding works. I spent about a week researching how to make a campaign, and then three days and three very late nights actually writing the campaign and trying to get it just right. I dreaded making the video most of all. I absolutely HATE being on camera above all else, but I did understand the importance of having a video so I knew I would just have to suck it up and give it my best try. Like I mentioned in my last post, I’m just lucky my husband Martyn who shot the video also knows how to edit. SO AWKWARD!!!

In the beginning, I very foolishly believed that launching the of the Kickstarter campaign would be the perfect thing to calm me down and take my mind off of the whole house-hunting and first-home-buying process. Well, I was half right. Although I have temporarily stopped wearing out the Redfin app on my phone, I now find myself constantly checking on the Kickstarter app, the Official Kris & Krampus Kringle Facebook page, and the temporary Instagram business page that took over my old account, @krisandkrampus 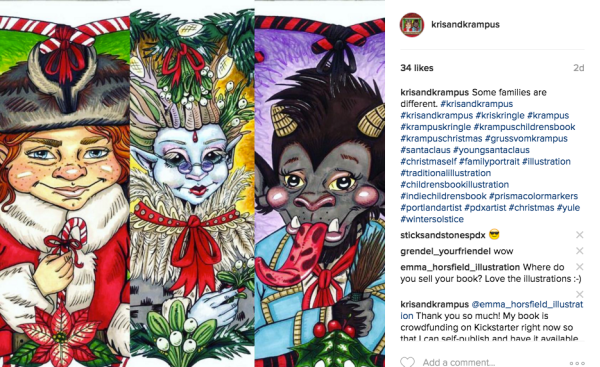 Perhaps the most terrifying tool that I have discovered so far is called Kicktraq, a site with some kind of mystical math-wizard that uses daily averages to predict the projected success of your campaign. I almost didn’t want to look, but curiosity killed the cat. Here’s the chart for Kris and Krampus Kringle, which appears to be updated every couple hours. Below is a screencap from right now:

Both of those seem pretty unrealistically optimistic to me, but whatever, I’ll take it.

Then there’s that whole challenge in finding a balance in knowing when put yourself out there and spread the word in order to be seen and adequately promote yourself, and when to remain silent for fear of annoying everyone in your social circle. I’m shy and not very good at that. I would much rather simply ignore the timer on Kickstarter and just let nature run its course, but luckily the fear of inadvertently self-sabotaging my only chance at getting this book published and letting all of my backers down has kept me far, far out of my comfort zone. I’m constantly thinking about what else I can try to get the word out, and every time I get another backer, I get such a rush of excitement and hope…which eventually starts to fade as another day ticks by and my relentless feelings of self-doubt return. This must be what an addiction to gambling feels like. I know that I seriously need to relax, but despite the outcome when it all ends at in 18 days at midnight on September 30th, I really can’t wait until all of this is over!

3. I am surrounded by friends and family who truly love and support me.

All anxieties aside, my experience with Kickstarter has also reminded me that I still have A LOT of friends and family that truly love and support me in all that I do. I recognize the names of all of my current backers with the exception of two strangers (who still might be people I know, but you don’t have to use your real name on Kickstarter.) I also have received massive encouragement and support from all my friends on Facebook; vouching for me by sharing my posts, ‘liking’ the Kris & Krampus FB page (140 people and counting) and not to mention all of the really kind and thoughtful comments! It’s because of them that I got this email only one week after the launch. 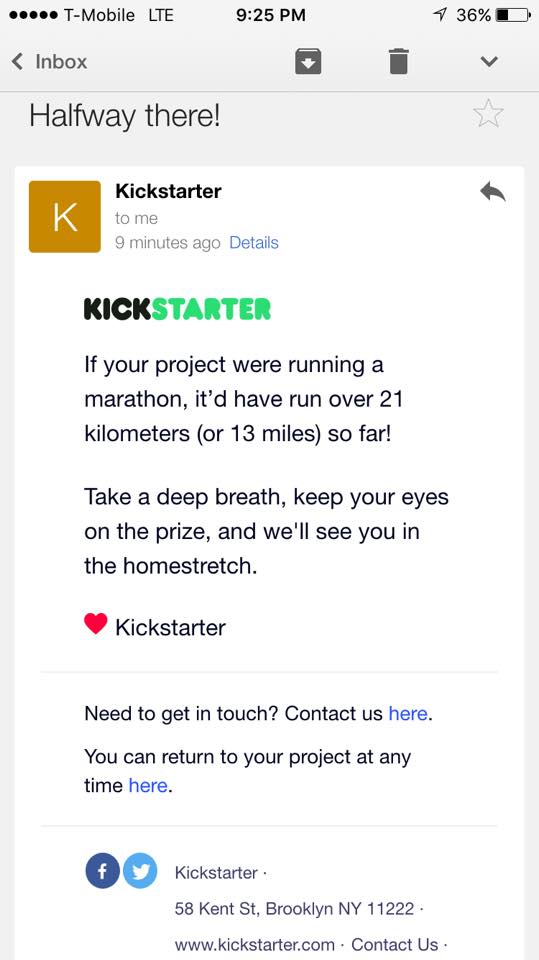 I am overwhelmed with love and gratitude whenever I really think about it, and this is the only thing that truly calms me down and keeps me going. That’s all I’ve got really got for you right now, just a slice of life, a neurotic ramble, and a little glimpse inside my head. Perhaps it will give you better insight at what it’s like to run a Kickstarter campaign for your ultimate creative accomplishment and labor of love. I think it’s entirely stressful and terrifying, not at all for the faint of heart, and demanding of every ounce of strength and courage that you can muster…but probably all worth it in the end!